Grants for Norwegian Journalism in November 2021

The Fritt Ord Foundation’s list of allocations has been updated to include grants for Norwegian journalism projects in November 2021.

In November, a total of NOK 665 000 in support was allocated for Norwegian journalism projects. The list of projects that received support includes digital journals, series of articles, themed issues and series of reports.

The Comic Culture Association was awarded NOK 100 000 for the further development of, among other things, podcasts, comic strip reviews, feature articles and the comic strip journal Empirix.

Theatre critic Per Christian Selmer-Andersen got NOK 50 000 for the project “Europe’s new stage”, a series of essays for Aftenposten based on the author’s travels through Europe and describing the climate for freedom of expression in various European countries.

Over the past four years, the Fritt Ord Foundation has earmarked nearly MNOK 100 in funding for journalism projects in Norway. This focus will continue, and it has now been decided that the Foundation will call for applications for funding of MNOK 25 per year for Norwegian journalism in 2022 and 2023.

The Fritt Ord Foundation’s list of allocations has been updated to include grants for more than NOK 100 000 in December 2021. 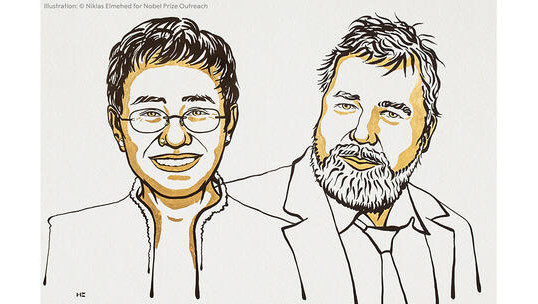 On 10 December, the Nobel Peace Prize 2021 was awarded jointly to journalists Maria Ressa and Dmitry Muratov for their courageous efforts to safeguard freedom of expression in the Philippines and Russia.