Technology and the Human Future

The New York Review of Books Foundation and Fritt Ord invite the public to the conference ‘Technology and the Human Future’, 20–21 October 2016 at Fritt Ord, Uranienborgveien 2, Oslo.

4:30: The Internet and Global Labor

10:00: A Discussion of Artificial Intelligence

2:30: Towards a Surveillance Society?

LIVE STREAM
About the conference
The justification for our conference and for its ambitious title lies in the emergence of three technologies which between them have the power to bring about deep changes in our lives and so to the human future in all its dimensions. These changes concern us as public citizens in our relations to the state, as private citizens in our relations to one another, and in our lives as consumers and employees.

The first of the technologies is the dramatic proliferation in the number and variety of ways in which we as citizens, consumers and employees can access the digital world through the Internet. Armed with desktops, laptops, tablets, smart phones, personal digital assistants, self-tracking devices and smart TV, space and time vanish as constraints on our capacity to connect with digital reality. We can be in touch 24/7 and we can be connected wherever on earth we may happen to be.

The second technology is the coming of Big Data, the capacity of information systems to gather and preserve the gigantic quantities of data yielded by these digital encounters, irrespective of whether the data arises from our insouciant surfacing of the Internet, our communications on Twitter and Facebook, or our often minute by minute transactions in the workplace.

The third technology is the power of smart software systems to analyse this data according to rules prescribed by programmers and, where necessary, to set this processed information alongside ‘key performance indicators’ which then match up performances and targets in real time.

Between them, these three technologies pose question whose answers will deeply affect the human future, and our hope is that the conference will address them. Among them: With the coming of what we’re calling ‘pervasive internet access’ is there evidence that the quality of our life experiences are becoming attenuated and fragmented, undergoing mutations which point to changes in what it means to be human?

With the second of our three technologies, does the capture, classification and use by businesses of Big Data yielded by our Internet lives have a legitimate role in adding to consumer convenience and choice; and at what point does this ‘reality mining’ bring unacceptable violations of privacy? Also, with the growing terrorist threat to Europe and North America, how far can the state legitimately go in relying on access to Big Data to protect its citizens?

Finally, does the combined use of these technologies in the workplace risk overwhelming employees with panoptic regimes of surveillance which may not only be an affront to their human dignity, but also obstacles to human creativity and so, ironically, enemies of the very employee productivity which between them the systems are meant to enhance?

KRISTIN BRAA is Professor at the Department of Informatics at the University of Oslo. She is the author, with Petter Nielsen and Ola Hodne Titlestad, of Innovation for Health in Developing Countries’ in ‘Medical Technology – Meeting Tomorrow’s Health Care Challenges (2014).

PAUL DUGUID is Professor at the School of Information at the University of California, Berkeley. He is the co-author, with John Seely Brown, of The Social Life of Information (2000) and of The Art of Knowing: Social and Tacit Dimensions of Knowledge and The Limits of The Community of Practice (2005).

HUGH EAKIN is a Senior Editor at The New York Review of Books, Editor of the New York Review Daily, and Adjunct Professor at the Columbia University School of Journalism, New York. He has reported extensively for The Review from Scandinavia and the Middle East.

ANE FARSETHÅS is an editor and critic at the Oslo newspaper Morgenbladet and a contributor to The Paris Review, New York. She is the author of Herfra til virkeligheten (From Here to Reality) a book on contemporary Norwegian literature.

LUCIANO FLORIDI is Director of Research at the Oxford Internet Institute and Professor of Philosophy and Ethics of Information at Oxford University. He is the author of The Fourth Revolution: How the Infosphere is Reshaping Human Reality (2014).

MARK GRAHAM is Professor of Internet Geography at the Oxford Internet Institute, University of Oxford, and a Faculty Fellow at the Alan Turing Institute at the British Library, London. He is the author, with William H Dutton of Society and the Internet: How Networks of Information and Communication Are Changing Our Lives (2014).

NEHA GUPTA is a PhD candidate at the University of Nottingham. She is the author, with David Martin, Jacki O’Neill and Benjamin V Hanrahan of ‘Turking In a Global Labor Market’, in The Journal of Computer Supported Cooperative Work (2016).

SUE HALPERN is Scholar in Residence at Middlebury College, Vermont, and Editor of NYRB Lit, the electronic imprint of New York Review Books. She is the author of A Dog Walks Into a Nursing Home: Lessons in the Good Life From an Unlikely Teacher (2014).

BERNARD HARCOURT is Isidor and Seville Sulzbacher Professor of Law at the Columbia University Law School and Director of the Columbia Center for Contemporary Critical Thought. He is the author of Exposed: Desire and Disobedience in the Digital Age (2015).

SIMON HEAD is a Senior Research Fellow at the Institute for Public Knowledge at New York University, and Director of Programs for the New York Review of Books Foundation. He is the author of Mindless: Why Smarter Machines Are Making Dumber Humans (2014).

VIRGINIA HEFFERNAN is an American journalist, editor and author. She is a former columnist for The New York Times and National Correspondent for Yahoo News. She is the author of Magic and Loss; The Internet as Art (2016).

THOMAS HEGGHAMMER is Senior Research Fellow at the Norwegian Defence Research Establishment. He is the author of Saudi Arabia in Transition (2014) and Jihad Culture: The Art and Social Practices of Militant Islamists (forthcoming).

EDWARD MENDELSON is Professor of English and Comparative Literature, and Lionel Trilling Professor of the Humanities at Columbia University, New York. He is the literary executor of the estate of W H Auden. He is the author of Moral Agents: Eight Twentieth-Century American Writers (2015) and of Later Auden (1998).

KALLE MOENE is Professor of Economics, and Professor at the Center for the Study of Equality, Social Organization and Performance at the University of Oslo. He is the author, with Erling Barth and Fredrik Willumsen of ‘The Scandinavian Model: An Interpretation’, Journal of Public Economics (2014).

GINA NEFF is a Senior Research Fellow at the Oxford Internet Institute, an Associate Professor of Sociology at Oxford and a faculty affiliate at the Center for Organizational Innovation at Columbia University. She is the author, with Dawn Nafus of Self-Tracking (The MIT Press Essential Knowledge Series) 2016.

ROBINDRA PRABHU is a project manager with the Norwegian Board of Technology concerned with big data and machine learning. and previously a research Associate at University College London, and He is the author of Opportunities and Limitations of Big Data in Evidence-Based Policy Making (2013).

GEORG FREDRIK RIEBER-MOHN is Chair of The Bord of Trustees of The Fritt Ord Foundation, Oslo. In 1980 he was appointed Deputy Under Secretary of State at the Norwegian Ministry of Justice and in 1986 Norwegian Director of Public Prosecutions. From 1997 until 2007 he was a Justice of the Nowegian Supreme Court.

JOHN SEARLE is Slusser Professor Emeritus of the Philosophy of Mind and Language at the University of California, Berkeley, and a winner of the US National Humanities Medal, 2004. He is the author of Seeing Things As They Are: A Theory of Perception (2015) and of The Making of The Social World: The Structure of Human Civilization (2010).

ELISABETH STAKSRUD is Associate Professor at the Department of Media and Communications at the University of Oslo. She is the author of Children and the Online World: Risks, Regulation, Rights (2013) part of the world’s largest research project on children and online risk: EU Kids Online.

BJØRN ERIK THON is Director of the Norwegian Data Protection Authority. He was Norwegian Consumer Ombudsman 2000-2010 and was a political adviser at the Ministry of Justice and Police 1999–2000. He is the author of The American President’s Norwegian Daughter – Olga Wilson’s Double Life (2014).

MARINA WARNER is Professor of English Literature and Creative Writing at Birkbeck College, London. She was awarded the Holberg Prize at the University of Bergen in 2015. She is the author of Once Upon A Time, A History of Fairy Tale (2014) and of Stranger Magic: Charmed States and the Arabian Nights (2013).

JON WESSEL-AAS is an attorney at the Norwegian Supreme Court and a partner of the law firm Bing Hodneland. He specializes in freedom of expression, privacy, media and civil rights law. He chairs the board of the International Commission of Jurists, Norwegian section.

BEN WIZNER is Director of the American Civil Liberties Union’s (ACLU) Speech, Privacy and Technology Department. He is an Adjunct Professor at New York University School of Law and is principal legal adviser to the US National Security Agency whistleblower Edward Snowden. 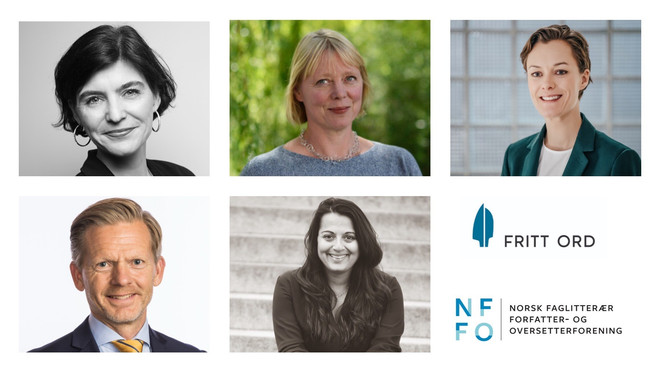